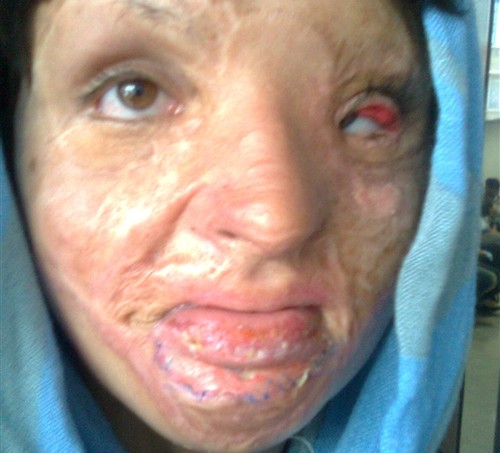 Golchin is a fifteen year-old girl from the village of Babol Abaad, in the province of Western Azerbaijan, Iran. Due to severe drug addiction Golchin’s father abandoned their home seven years ago never to return. Golchin’s family is consisted of her mother, three brothers and one sister. The entire family is supported by Golchin’s oldest brother who has dropped out of school to work as a day-worker in the nearby cities. For the past two years we have been involved in following up and aiding in Golchin’s medical care including the cost of her treatment and transportation to and from Tehran, prescription drugs and hospitalization as well as one hundred thousand Toman’s (measure of Iranian currency) a month for her brother’s education expenses.

About four years ago Golchin was severely burnt while attempting to pour gasoline on the charcoal remains of the Persian annual traditional bonfire during the festival ofChahar Shanbeh Souri. She suffered burns to the face, ears, hands and body. One of the eyelids was so badly injured that to this day six surgical repair attempts have failed to restore the strength to the eyelid to allow it to shut properly. Dr. Motamed the attending physician has stated that Golchin will need to undergo yet another surgical procedure to further repair the eyelid which will take place next month. After the eyes the surgical team will focus on Golchin’s face and hands.
Golchin does not know how to read and write. At the time of the incident she had only completed up to the third grade level of education. The shock from this traumatic incident has caused Golchin to lose some of her classroom learned memories setting her even further back academically. Furthermore due to her disfigurement she does not was to return to school and face her classmates until as she says: “my face has healed.” To cover the expenses for Golchin’s medical care her mother has sold anything that can be sold in the house and has borrowed money from neighbors and friends which she has not been able to pay back in full as of yet. The emotional pressure from what happened to Golchin as well as the financial pressure eventually drove Golchin’s mother to attempt suicide by pouring petroleum on herself and trying to set herself on fire. This suicide attempt was interrupted by the neighbors who saw the event as it was taking place. We are actively exploring all possible solutions to help solve this family’s crisis.